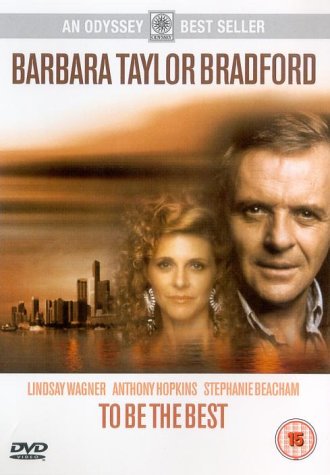 To Be The Best

Romance, murder, betrayal - just some of the vital ingredients of To Be the Best, the spectacular and gripping conclusion to Barbara Taylor Bradford’s celebrated trilogy of novels tracing the fortunes of the Harte dynasty.

The powerful and beautiful Paula Harte (Lindsay Wagner), designated heir to the Harte empire, finds herself under attack from her vindictive cousin Jonathan (Christopher Cazenove), who is determined to gain control of Harte’s massive worldwide wealth.

As death and deceit undermine Paula’s position, it seems that only one man, her attractive head of security Jack Figg (Anthony Hopkins) has the expertise and connections to uncover Jonathan’s murky secrets and rescue Paula from certain ruin.

Played out against stunning locations, from exotic Hong Kong to the power capitals of the West, To Be the Best is entertainment at its best — romance, adventure, an all-star cast and a story from the the number one international best-selling author Barabara Taylor Bradford.

Barbara Taylor Bradford's 'To Be The Best' Movie Trailer